Branches of the Vine

While I grew up in the south suburbs of Chicago, I have a long connection with Michigan. My grandmother (Mormor) lived there so my family was in Michigan often. Then, after college, Jim (my ex) and I settled in southwest Michigan and raised our boys there. I often describe the area as a few small cities surrounded by corn fields, orchards, and vineyards.

At harvest time, the vines look like this, lush and green, loaded with fruit. For some grapes, the leaves are placed over the fruit clusters to protect them from the sun. Other grapes do best with more sunlight.

But before the new growing season, the vines are all pruned back. It seems cruel. But it is the best way to care for the vine and to have an abundant harvest each year. There is a skill to trimming grape vines, cutting back just enough and not too much. Grape vines grow whether we want them to or not; but they produce the best fruit if they are trimmed regularly, carefully.

This is what Jesus is talking about in today’s Gospel reading. Jesus is the vine, and we are the branches. Jesus wants us to stay connected to the vine; at the same time, he recognizes there may be times when we need to be trimmed, pruned, in order for us to be the healthiest branches.

For example, one day at seminary in Chicago, I was walking to the grocery store a couple blocks away. As I looked toward the corner, I noticed a cluster of young black men in hoodies standing and talking on the corner. Just to be safe, I crossed the street before I got to the corner.

Was I being safe? Or was I exhibiting prejudice? This moment plays in my mind regularly to remind me that I have prejudices, and that I am not always proud of the way they make me act. I think of it as God’s way of pruning me. God’s pruning helps me remember that God loves young men in hoodies as much as God loves me.

… The Book of the Acts of the Apostles could easily, and perhaps more appropriately, be called the Acts of the Holy Spirit. It’s easy to see evidence of Spirit on every page. Today, we have the story of Philip and his encounter with an Ethiopian eunuch. 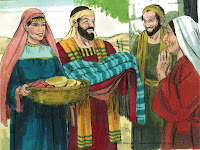 Philip is a deacon, a new order of church workers that arose when the first disciples learned they were not able to serve all the widows in town. We are more familiar with the name Stephen, a deacon, and the first believer to be killed for his faith in Jesus. Philip has been spreading the good news in Samaria, east and north of Jerusalem.

The eunuch is on his way from Jerusalem back to Africa, by way of Gaza. We know a few things about him. We know his body is different, so most people would have seen him as imperfect, damaged. He is an official – so he has power, despite his lack of social power as a eunuch in the Roman Empire. He has the use of a chariot, so he is an important person in Ethiopia. He was in Jerusalem to worship, but he would have been prevented from entering the Jewish temple because his body was imperfect. 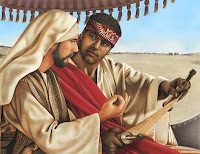 Here’s where Spirit enters the story. The eunuch happens to be traveling and reading the scroll of the Prophet Isaiah. Philip is nearby, thanks to Spirit, and Spirit says to Philip, go and join the man in the chariot. Philip joins the eunuch in the chariot and begins the conversation. “What are you reading, and do you understand it?” “No, I need someone to explain it to me.” So, Philip connects the dots between the scripture and Jesus and baptism. 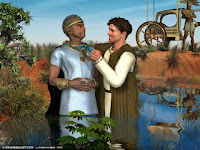 They are on a wilderness road, going through the desert, but Spirit provides water! The eunuch sees the water and asks to be baptized right that minute. Philip does the baptism and then disappears, because Spirit needs him in Azotus, a city on the Mediterranean Sea. The eunuch takes the good news of Jesus’ resurrection and God’s grace to Africa where many come to believe because of this eunuch.

The book of Acts demonstrates that Spirit welcomes all people, even those who have traditionally been left out: women, foreigners, non-Jewish people, people of all ages and abilities and shapes and colors. It is because of people like the eunuch sharing the good news that Christianity spread around the world. 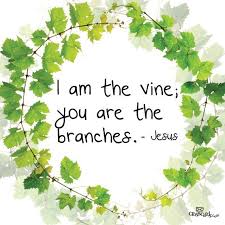 Jesus welcomes and loves all people – anyone who chooses to follow him is welcome. He offers himself to all people by extending a branch of the vine. All we have to do is grab onto it.

When you came in, you received a piece of grapevine. Notice that there are tendrils on the vine. They serve to seek out and maintain a hold on the fence or on other sections of the vine. These tendrils are so persistent that even detached from the fence, even though the vine is dead wood, the tendrils are designed to connect with something. That’s why each piece had to be in a separate bag, otherwise Julia would have had a challenge handing out just one piece of vine.

I think Jesus may be just as persistent in trying to keep a connection with us. He will grab on to us so he can love us and offer us mercy. He will remind us that we are his branches.

Let this piece of vine be a symbol for you, a reminder that you are connected to Jesus the Vine. Maybe this piece of vine can be a conversation starter, a way to talk about Jesus with someone who needs to know Jesus loves all people, no exceptions. It is through us, the branches, that the good news of Jesus’ resurrection and God’s grace continue to spread. It is with the tendrils that we make connections with each other and with God, connections that are quite hard to break.  Amen