Both the wine steward and the baker for Egypt’s king offended their master, the king of Egypt. 2 Pharaoh was angry with his two officers, the chief wine steward and the chief baker, 3 and he put them under arrest with the commander of the royal guard in the same jail where Joseph was imprisoned. 4 The commander of the royal guard assigned Joseph to assist them. After they had been under arrest for some time, 5 both of them—the wine steward and the baker for Egypt’s king who were imprisoned in the jail—had dreams one night, and each man’s dream had its own meaning. 6 When Joseph met them in the morning, he saw that they were upset. 7 He asked the officers of Pharaoh who were under arrest with him in his master’s house, “Why do you look so distressed today?”

8 They answered, “We’ve both had dreams, but there’s no one to interpret them.”

Joseph said to them, “Don’t interpretations belong to God? Describe your dreams to me.”

9 The chief wine steward described his dream to Joseph: “In my dream there was a vine right in front of me, 10 and on the vine were three branches. When it budded, its blossoms appeared, and its clusters ripened into grapes. 11 Pharaoh’s cup was in my hand, so I took the grapes, crushed them into Pharaoh’s cup, and put the cup in Pharaoh’s hand.”

12 Joseph said to him, “This is the dream’s interpretation: The three branches are three days. 13 After three days, Pharaoh will give you an audience and return you to your position. You will put Pharaoh’s cup in his hand, just the way things were before when you were his wine steward. 14 But please, remember me when you are doing well and be loyal to me. Put in a good word for me to Pharaoh, so he sets me free from this prison. 15 I was stolen from the land of the Hebrews, and here too I’ve done nothing to be thrown into this dungeon.”

16 When the chief baker saw that the interpretation was favorable, he said to Joseph, “It was the same for me. In my dream, there were three baskets of white bread on my head. 17 In the basket on top there were baked goods for Pharaoh’s food, but birds were eating them out of the basket on my head.”

18 Joseph responded, “This is the dream’s interpretation: The three baskets are three days. 19 After three days, Pharaoh will give you an audience and will hang you from a tree where birds will peck your flesh from you.”

28 I cry out to you, Lord.
You are my rock; don’t refuse to hear me.
If you won’t talk to me,
I’ll be just like those going down to the pit.
2 Listen to my request for mercy when I cry out to you,
when I lift up my hands to your holy inner sanctuary.
3 Don’t drag me off with the wicked and those who do evil;
the type who talk nice to their friends
while evil thoughts are in their hearts!
4 Pay them back for what they’ve done!
Pay them back for their evil deeds!
Pay them back for their handiwork!
Give back to them exactly what they deserve!
5 Because they have no regard for what the Lord has done,
no regard for his handiwork,
God will tear them down and never rebuild!

6 Bless the Lord
because he has listened to my request for mercy!
7 The Lord is my strength and my shield.
My heart trusts him.
I was helped, my heart rejoiced,
and I thank him with my song.
8 The Lord is his people’s strength;
he is a fortress of protection for his anointed one.
9 Save your people, God!
Bless your possession!
Shepherd them and carry them for all time!

23 When Jesus got into a boat, his disciples followed him. 24 A huge storm arose on the lake so that waves were sloshing over the boat. But Jesus was asleep. 25 They came and woke him, saying, “Lord, rescue us! We’re going to drown!”

26 He said to them, “Why are you afraid, you people of weak faith?” Then he got up and gave orders to the winds and the lake, and there was a great calm.

27 The people were amazed and said, “What kind of person is this? Even the winds and the lake obey him!”

Some days, I feel like I am drowning, or having a bad dream. Never did I expect COVID-19 to bind us to our houses and mask-wearing all summer. Will this go on until Advent? Will we even be free to be more normal in January? Will it last until Easter?

The other day, I was on a Zoom call with other pastors where we each take turns giving an update, then there is time for general conversation. On my turn, in addition to talking about the remodeling in our bathroom, I expressed my frustration with the complications of the lock-down. When we all unmuted for general conversation, one of the pastors addressed me. “Lynn,” she said, “I hear your pain. In fact, I think you were close to tears. I’ll pray for you.” While none of my issues were resolved, I felt better. I felt as if God had heard my cries for help. 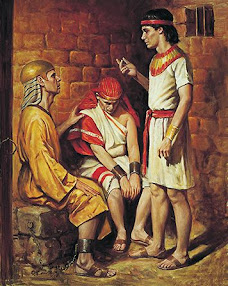 Joseph, stuck in prison because he was falsely accused of inappropriate behavior, interprets dreams, which come true. “Remember me when you get out.” But the wine steward forgot him. He remained there until the Pharaoh had a dream that needed to be interpreted. Then, he was released and ended up as Pharaoh’s Vizier, second in command, just under Pharaoh himself.

God gave Joseph the gift of interpreting dreams. God must also have given him the gift of administration and exhortation so he could successfully manage to prepare for the drought that was coming. God used Joseph and his gifts for God’s purposes. 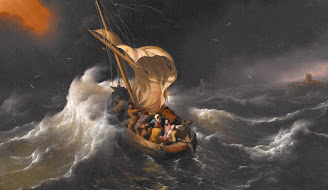 The disciples were in a boat in the middle of a storm, and they were terrified. In the meantime, Jesus slept like a baby. The disciples cry out to him. Maybe they even touch him, shake him, to get him to pay attention. Finally, Jesus awoke. He asked, “Why are you afraid?” But he stilled the storm anyway. Filled with divine power, Jesus quiets the fears of the disciples and gives them a hint of his identity. They were amazed, awe-struck at what Jesus has just done.

When our lives go wonky, or worse desperate, we cry out to Jesus because we trust that he is there. We don’t expect him to fix things, though we do hope he will. It is comforting just being reminded that God knows what we are going through and is weeping with us, and sending Spirit to work making changes.

Sometimes those plans are long-term, as it was for Joseph in Pharaoh’s prison. Sometimes they are as quick as someone noticing that we are in pain or afraid. We may not get an answer, a quick resolution like the stilling of the storm, but nevertheless we know God hears our cries, and often that is enough.

So, let’s keep praying for this pandemic storm and its complications to end quickly. And let’s pray for our neighbors to wear masks and stay home, whenever they can. Just sayin’! Amen

This beautiful video is almost 8 minutes long. Leave when you are ready or stay for the end.

Posted by Pastor Lynn Fonfara at Thursday, August 13, 2020 No comments: