Every year the first three Sundays of Easter tell stories that occurred on Easter Day, morning and evening. Today, the first portion of the Gospel reading tells about the appearance of Jesus on the evening of Easter Day, after Mary Magdalene has seen Jesus in the garden. The second portion of today’s text tells the story of a week later.

Jesus suddenly appears in the room with the disciples. He first offers them divine peace, then gives them a command: as the Father has sent me, so I send you. He gives them the authority to forgive sins in his name. After some conversation, I assume he didn’t just leave them quickly, Jesus disappears again.

A week later, the disciples are gathered together again. This time Thomas is with them. There is no explanation about where he was the previous week, but he is upset that he missed seeing Jesus. I suspect he is angry with himself for not being there, jealous that he missed out. He is reluctant to believe that Jesus has appeared because he hasn’t seen Jesus for himself.

Jesus knew Thomas would need something extra to conquer his reluctance to believe. He offered Thomas more than was needed because he loves Thomas. He met Thomas where he was to help him come to faith. Tradition has it that Thomas went to India and brought many people to Jesus because of his now strong faith. 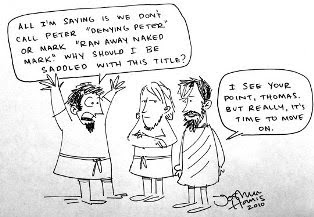 Thomas has been given the nickname “Doubting Thomas” because he is slow to believe. But I think that is unfair. The cartoon says: All I’m saying is we don’t call Peter, “Denying Peter” or Mark, “Ran Away Naked Mark”. Why should I be saddled with this title? … I see your point, Thomas. But, really, it’s time to move on.

Many of us have been faithful all our lives. We started out going to church as children, accepting the faith of our parents and Sunday school teachers. We believed what we were told.

When we became teenagers, we began to question what we were told. We needed to make faith our own. Confirmation Class gave us that opportunity.

Some of us found ourselves seriously questioning our faith in college. Others at the same age became sure of what we believed, what we already knew.

Over time, we began to practice our faith, belonging to church, bringing our children, volunteering our time and talents to serve Jesus. 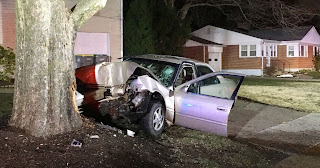 Some people come to faith suddenly. One of our neighbors just got married. Maureen and Allen are my age, and acting like teenagers in love. For a long time, Allen ignored God. Then, he was in a car accident – running head-on into a tree. He could have been killed, but walked away from the car without a scratch. He gives credit to God, and is now an active believer in Jesus.

Some people need to have proof that God exists. They want to have facts to prove God is there. They are not convinced with the stories in the Bible. But they may be convinced when we share our personal experiences. Or, they may encounter something that science and math can’t explain, like the healing of cancer. And then they are able to admit that God may have done such an otherwise un-explainable thing. 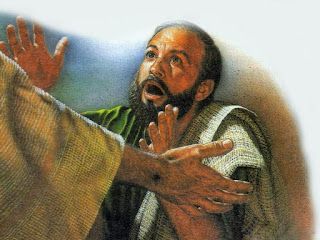 I think Thomas might have been like this. He needed some kind of proof before he could believe. It’s notable that even though he demands to touch Jesus, once Jesus is in the room with him, he doesn’t need to touch him to believe. Seeing Jesus is enough.

Then, Thomas goes to the other extreme. He falls to his knees and declares Jesus is his Lord and his God.

… How did you come to faith? Was it a lifetime of learning, or a sudden decision? Did you face a crisis? Did you need proof? How often have you doubted?

Theologian Paul Tillich says: “Doubt is not the opposite of faith; it is one element of faith.”

What usually happens is we waver between believing and doubting most of our lives. When we face a crisis, our faith is both challenged – “Why would God let this happen” – and strengthened – “Thank you, God, for being here with me right now.” Our faith gives us the courage to face our doubts. And our doubts give us an opportunity to strengthen our faith.

Whether today you are rock solid or wavering in faith, Jesus loves you and meets you wherever you are. 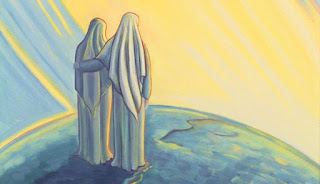 As we work together to discover who St Matthew’s Lutheran Church in Ocala is today, we will depend on God’s leadership. We will need to be open to change, to challenges, to an exciting new future. Wherever we go, Jesus will be on the journey with us.

Posted by Pastor Lynn Fonfara at Sunday, April 28, 2019 No comments: