Places of the Passion, Week 3, Gethsemane 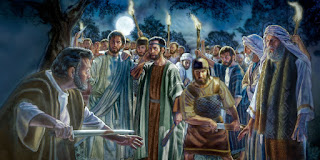 We’re in the middle of a worship series called Places of the Passion. Today we walk with Jesus to the Garden of Gethsemane. Gethsemane is where Jesus faces temptation, praying hard to discern if this is really God’s plan. Gethsemane is the place where it appears Jesus has lost control! Betrayal and an arrest and an assault and desertion—all leading to death by crucifixion. It’s a night filled with chaos.

The crowd that collects here is a crowd of Jews—the chief priests (who controlled the temple) and elders (who were rulers of the Sanhedrin, the Jewish senate of seventy). This is like the Supreme Court and Congress sending the FBI to arrest you! The chief priests and the elders want to be in control.

“Now Judas had given them a sign, saying, ‘The one I will kiss is the man; seize him.’ The chaos commences as Jesus is arrested. “And one of the disciples drew his sword and struck the servant of the high priest and cut off his ear.” More chaos!

Even though it doesn’t look like it, Jesus is in control! Judas and the Jews appear to be running things. But Jesus is really the one in control! There is order in the chaos.

When his enemies come, Jesus goes out to meet them. The control is clear! 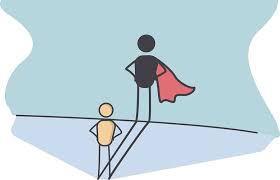 Feeling like we have some control is essential to our mental health. During WW II, psychologists compared ground troops with fighter pilots. They determined that after sixty days of continuous combat, the anxiety of ground troops was off the charts. However, an astounding 93% of fighter pilots were happy and at peace.

Why is that? The fighter pilots had control! They had their hands on the throttle! Ground troops, on the other hand, felt forlorn and helpless. They could be killed standing still or running away. What’s the point? Popular wisdom tells us, “Take charge of your life!”

We always want to be in control, in charge. Think about it: What happens when there is a backup on the interstate highway? A team of German researchers recently found that a traffic jam triples our chances of a heart attack. That makes sense because in slow traffic we lose control. We are not in charge, and it drives us nuts. It feels chaotic.

o what’s the plan when chaos hits? “Take charge! Be in control!” Use an app that helps you avoid traffic jams. Never board a plane without a parachute. Never leave the house without a gas mask. Never step on a crack lest you break your mother’s back! That’s it! Face every problem by taking control!

There’s only one problem with this popular wisdom. It doesn’t work! What works?  Rather than seek control, relinquish control—give it all up. Let go. Resign as CEO of the universe. Give your entire mess to Jesus. Look what Mark 4:41 says, “Even the wind and the waves obey him!” Jesus is in control!

No matter what, we don’t have to become hopeless or anxious or faithless. We can stay calm. Why? In the midst of chaos, Jesus delivers perfect peace. Amen. 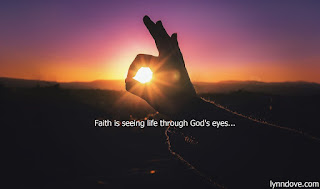 Posted by Pastor Lynn Fonfara at Wednesday, March 10, 2021 No comments:

In 2010, Mike and I went to the Holy Lands with a group from Lutheran Seminary of the South – usually called “Southern Seminary.” Each land we went to had its own money. We needed to convert US dollars into Egyptian pounds. In Israel we needed shekels. Each time we converted money, the exchange rate effected the value of our dollars, and there was a fee for the conversion. It also was true that in both countries, the street vendors were happy to take American dollars. 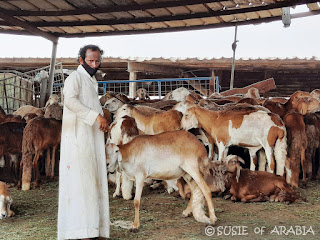 Today’s Gospel reading begins with Jesus entering the temple compound. The scene probably looked like a souk, a Middle Eastern marketplace. Jesus was objecting to the whole sacrificial system. The temple rules required perfect animals, either brought from home or purchased on site.

If you were traveling long distances, from India or Rome or Cairo, you wouldn’t bring your sacrificial animals with you. You purchased your offering when you got to the temple. Foreign money, even the Roman coins used in Jerusalem, wasn’t permitted in the temple. It was necessary to change foreign coins into Temple coins, which were needed to purchase animals for sacrifice. 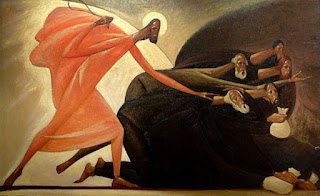 In the Gospels written by Matthew, Mark, and Luke, this event – the clearing of the tables of the money changers – occurs during Holy Week. It is one of the triggers for his arrest and death. But in John’s Gospel, it happens at the beginning of his ministry. It is if Jesus is saying, “Here we go. Let’s get this thing going.”

I wonder if Jesus was thinking this: Is it really necessary to have the most perfect animal for sacrifice? Does this put a burden on poor Jews who have to scrape up enough money to pay for the animals? Is it necessary to use only temple coins in the temple? Haven’t the prophets said over and over again that God wants our hearts not our animal sacrifices?

… Jesus begins his ministry in John by overturning the tables and crates of the vendors. He yells at them, “God’s holy temple should never be a marketplace! It looks like a souk here!”

Finally, someone challenges him. “Hey! What do you think you are doing? Don’t you know this is God’s temple, God’s holy place?! What gives you the right to do this? Prove to us you have the authority to chase us away.”

Jesus replies, “Destroy this temple and in three days I will raise it up.” I wonder if he says that while touching himself on the chest – a subtle hint to what he really means. Of course, the people take him literally. “So far, it has taken 46 years to build this temple. What do you mean you can do it in three days?”

The text has a couple interjections. They give us clues to what the disciples were thinking at the time, and how they later gave the fuller meaning to his words that Jesus intended. After the resurrection, the disciples could say, “Aha. Remember when Jesus said this? Now, we understand what he was talking about! His body is the temple. Jesus himself is the temple.”

At the time, there in the temple in Jerusalem, they couldn’t imagine what Jesus was talking about. The temple was a very solid building, built to last a lifetime.

As it turns out, 40 years later, Rome would conquer Jerusalem and destroy the temple. 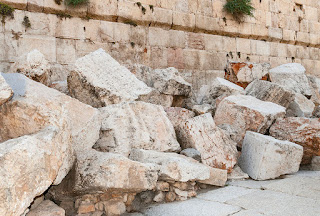 The destruction of the temple changed Jewish worship forever. The sacrificial system centered on the Jerusalem temple was replaced with worship in local synagogues. The sacrifice offered from then on was and continues to be that of prayer.

But we have learned a lot, this past year. We have learned that we can worship God while we are separated by miles, yet connected through the internet. That’s because we don’t worship the building, or the familiar form of our liturgy. We worship God. We are the Body of Christ, whether we are together or far apart. We are the Body of Christ with hundreds of millions of others around the world, worshiping at home, or in the building with COVID limits, just like us. 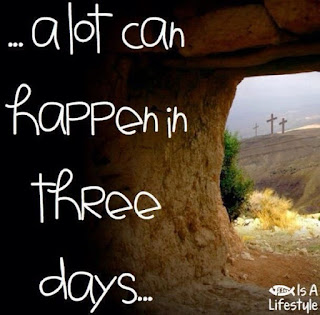