Your faith has made you whole

With today’s Gospel text, Jesus continues on his journey toward Jerusalem. He has traveled through much of Galilee, west into Tyre and Sidon, east into the ten cities in what is now Jordan, and now he is moving south into the region between Galilee and Samaria. It’s a sort of no-one’s-land, where Galilean Jews and Samaritans live together, mostly in peace, but not always.

The basic differences between Jews and Samaritans are their scriptures and their holy locations. Most other differences stem from these two. Jews believe the Torah, (the first five books of the Bible), the history, the prophets, and the writings (such as the Psalms, Proverbs, Job, Ruth, and Song of Solomon) are holy books. The Samaritans believe only the Torah is holy. The Jews claim Mount Horeb as holy, while the Samaritans claim Mount Gerazim as holy. These differences keep them apart and occasionally cause them to see each other as enemies. 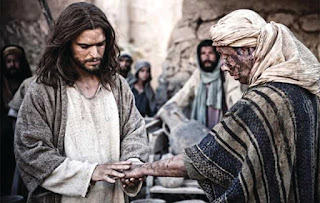 In this region between Galilee and Samaria, Jesus finds a community of people with skin diseases. In its early stages, leprosy resembles psoriasis. It is now easily treated with multiple drug therapy, but in ancient times it was a devastating disease of the nervous system. Nerve endings die, so people lose feeling, and minor injuries become major because of this loss of feeling.

Without the diagnostic tools we have today, people with certain skin diseases were isolated to protect the rest of the population. They wore torn clothing, covered their upper lips, and called out that people should stay away from them.

Scripture includes specific descriptions for the diagnosis and treatment for many skin diseases. Priests were trained in such medical care, as well as in declaring when skin was clean. So, when Jesus encounters these ten folks with skin diseases, he knows what should happen.

They all cry out, “Jesus, master, have mercy.” They all, Jew and Samaritan, believe Jesus can heal them of their diseases. And he does. He says simply, “Go and show yourselves to the priest” because the priest can declare them clean. That declaration will allow them to end their isolation and go home. 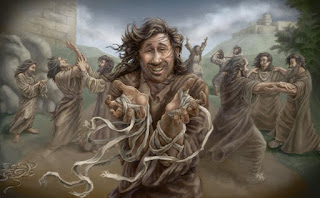 As they walked, they noticed they were already clean. Nine of them hurried off to the priest, while one of them turned around and fell on his face in front of Jesus. “Thank you, Jesus! Thank you, God!” Jesus replies, “Your faith has made you well.” The text doesn’t say if this tenth man went to the priest also, either Jewish or Samaritan. Jesus simply told him to return to his life.

Jesus does wonder why only the Samaritan returned to give thanks. I wonder if Jesus was tired and having a bad day. He had just sent them all to see the priest, after all! And they were doing as he told them. I love the way this image shows them celebrating their cleansing. Perhaps it’s what happened along the way. Thanking God and celebrating often go together. 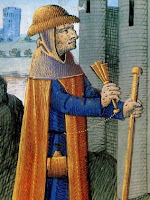 … Even in the Middle Ages, leprosy was a serious, isolating disease. Francis of Assisi spent his first years living with a community of people affected with leprosy. It was in 1873 that the bacteria that causes the disease was discovered by Gerhard Hansen. Leprosy, now called Hansen’s Disease, still exists, especially in poor areas around the world, including the diagnosis of about 200 cases a year in the US.

In both stories, the word that is translated here in English as “well” can also be translated as “whole.” The text can read, “Your faith has made you whole.” What is the difference between being made well and being made whole? Healing is about physical restoration. When we are made whole, our hearts and minds are connected to the healing and it is more complete. 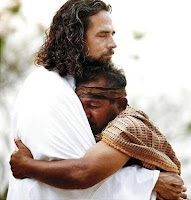 Would it make you feel like jumping for joy? Like falling on your knees and praising God?

When we get a diagnosis of cancer, or heart disease, or dementia, we feel broken. Of course, it’s not just a devastating disease that can make you feel broken. What else makes us feel broken? (congregational input)

(My list:For example: Death of a loved one; broken relationships; loss of a job; inability to pay the bills; failing a class; and so forth.)

What makes us feel whole when we have felt broken? (congregational input) (My list: Prayer, hugs, people showing up, crisis specific assistance, the doctor saying “we’ve got this!”) 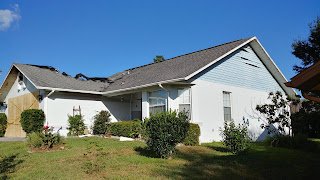 One story: Last Wednesday Mike and I went to a movie and dinner at a restaurant. It was dark when we got home. As we turned into our neighborhood, we could see flashing red lights at the head of our street. I turned left, thinking we could get home by going around the block. But there were fire engines at the other end of our street as well. (It’s only 1 block long.) So we parked where we could.  As soon as we opened the car doors, we could smell the smoke, and walked up the street, praying it wasn’t our house. It wasn’t, it was the house next door.

We found M and her adult children outside, helplessly watching the firefighters battle the blaze coming from her garage. They were able to limit the damage to the garage and the bedroom and bathroom behind the garage, but the whole house will need restoration. It was a wire that for years had been touching some plywood that finally sparked a fire.

While the fire is out, and M is living with family for now, it will be a long time before she feels whole once again. Whenever she hears a fire siren, she will have that sense of fear. Whenever she smells smoke, she will remember what her house smelled like. 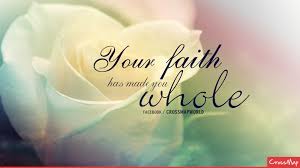 M is a person of faith, just as the leprous persons were, just as the bleeding woman was. And just as we are, or try to be, when catastrophe befalls us. To all of us, Jesus says, “Your faith will make you whole.” Trust in him to heal you, to restore you, and to help you get through the worst times of your life. Trust him to guide you to be the hands that help others in need, that there will be healing and wholeness for you and for all.

Trust him to help make you whole today as you come forward for anointing for healing. If you don’t believe it can work, why are you coming?

Posted by Pastor Lynn Fonfara at Sunday, October 13, 2019 No comments: