Are you who I think you are?

Because we know the answer, we wonder why John is asking this question: “Are you the one, or is there another?”
Just like today, some people in the time of Jesus had an end-times outlook on life. Others did not. Some people looked for a new Messiah, a military ruler like David, who would conquer the Romans. The Essenes seemed to believe there would be two end-times figures. 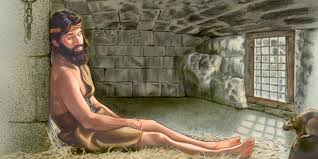 John may have been connected to the Essenes, so he was checking to see if Jesus was really the one they should be looking to. John is now communicating with the world not from the banks of the Jordan, but from behind Herod’s prison bars. Where now are the crowds? Still, his close followers are with him and he sends this message to Jesus.
Jesus’ reply is a sort of quotation of a passage from Isaiah: What do you think? The blind see; the lame walk; the chronically ill are healed; the deaf hear; the dead are raised; and the poor hear good news. This is just about the opposite of a military conqueror that most people of the time, including John, expected.
Jesus also replies with a message of encouragement for John: You are just who you have thought yourself to be. You are the messenger who has come to announce the coming of the Messiah. You are the most important person in the world.

So, here we are, 2,000 years later. It seems we are still waiting. Some people are still waiting for the end-times. They try to predict it: there will be wars and rumors of wars – there have been wars and rumors of wars for thousands of years. There will be signs in the heavens and the earth – there have been hurricanes and floods and earthquakes and fires for thousands of years. There will be plagues and disease – there have been plagues and diseases for thousands of years. These constantly recurring events have not brought Jesus. Neither has the red heifer or plans to rebuild the temple or the repopulation of Jerusalem by Jews.
What will bring Jesus is our caring for those in need, every day, in little and great ways, caring for the blind, the lame, the deaf, the poor, the oppressed, and the oppressors.
You know how to do that. So, I’ll just share some stories that inspire me. 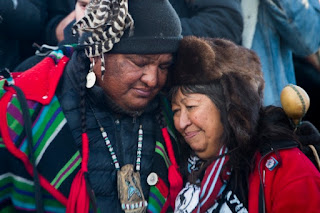 First: a couple of stories about the protest at Standing Rock over the building of an oil pipeline through Native American land.
Dustin Monroe is a Native American and a US Army veteran. For months he has brought food and supplies to Standing Rock to support the thousands of people gathered to protest the pipeline through Native lands. And he continues to stand with them against this invasion of sacred grounds. Serving in this way heals him from the wounds of war.
Even though the Corps of Engineers denied a permit to cross the Missouri River, and it seemed like victory is at hand, the energy corporations insist their plan will continue. The National Guard has been reinforced and additional bunkers built to protect the rights of the corporations.
Chase Iron Eyes, a spokesperson for the tribe has declared that this is a critical time for democracy. Will big corporations rule, will big money rule, or will the people rule?
So, does the insistence on building the pipeline through Native sacred grounds and across sacred water seem like oppression to you, as it does to me? If it does, then Jesus is there with the people, resisting what they see as an invasion. 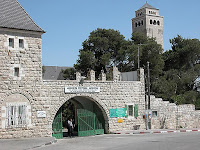 Then, a different story: In 2010, My husband Mike and I joined about 45 other Lutherans in a tour of the Holy Lands. We spent a few days in Egypt, then mad our way by bus from south to north in Israel. We spent time in Jerusalem’s Old City, and some time in Palestine, in East Jerusalem.
One of the highlights for me was a tour of Augusta Victoria Hospital, which is a Lutheran World Federation mission site. The wall built to protect Israelis from attacks from militant Palestinians, divides the city into a place of haves and have-nots. West of the wall there are plenty of hospitals and medical centers. East of the wall, there is one, Augusta Victoria.
The staff of the hospital does what all hospitals do, but they focus on care for chronically ill Palestinians, whether they are Christian, Jew, or Muslim. They specialize in treatment for cancers, in dialysis, in diabetes care, as well as the usual surgeries and sub-acute care units.
In addition to serving the people of the West Bank, they do job training and employ those whom they train, from office work to cooks to nursing care and physicians.
The community outreach program sponsors soccer teams with children of all faiths playing together. They also encourage all the things our local hospitals do, preventative screenings and health education.
In many ways, Augusta Victoria Hospital cares for the blind, the deaf, the chronically ill, the lame, and the poor. And Jesus is there through the offerings we give, and the care provided by the staff of the hospital.
So, this week, as we prepare for the coming of Jesus as a baby once more, let’s be aware of the many ways he already comes to us and those in need. Jesus is who we think he is, and lots more.
Let’s pray for the protestors at Standing Rock, that they will be safe and warm. Let’s pray for those who insist on building the pipeline, that they will hear Jesus’ words of protest and find another way. Let’s pray for all those who live and work and serve in and near Jerusalem, that there will be respect for each other and peace between peoples. And let’s pray for ourselves, that we may find joy in knowing Jesus comes to us all the time, in many ways. Amen

Posted by Pastor Lynn Fonfara at Sunday, December 11, 2016 No comments: