Places of the Passion: Good Friday at Golgotha

We continue our journey through the places of the Passion. Tonight, we are at Golgotha, the place of the skull. It’s the place where Romans throw away human bodies after doing the most unimaginable things to them. It’s also the city dump where the refuse of daily life is left to rot. 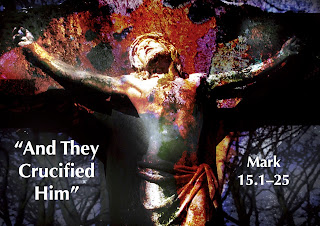 Mark says simply, “They crucified him.” Mark had no need to offer any details. His readers would have been fully aware of what that meant, in the same way that we know what it means to hang someone or use the electric chair.

The Romans had crucifixion down to a science. They knew what would cause the most pain without killing the person too quickly. Usually, it took several days for people to die on the cross, but Jesus had been badly beaten, so his body only lasted 6 hours. And perhaps God was merciful.

Jesus had known God’s presence his whole life. Now, on the cross, he was experiencing separation from God. How emotionally painful this must have been! Yet, this separation must have been necessary, in order that Jesus’ body could die but his spirit live on.

It’s important that we pay attention to a detail Mark mentions. The curtain in the temple is torn apart. This curtain divides the Holy of Holies, the most holy space, from the simply holy spaces of the temple. Only the high priest entered this space and only once a year. It was designed to prevent ordinary people from coming into close contact with God. When the temple curtain is torn apart, God makes it known that anyone is welcome in the divine presence.

With Jesus’ death and resurrection, all things are made new. Since the beginning, people have said that God has power is over all things. Now, we know that God even has power over death. But first, we must remember the death.

It’s so easy to forget about the death. Just skip from Palm Sunday to Easter Sunday without the painful stuff in-between. The demonstration in the temple, the challenges by the leaders, the long good-bye with the disciples. Not to mention the betrayal, the arrest, the trial, the abuse and torture.

And the time on the cross. In Lutheran churches, the cross is usually empty, though some have crucifixes, crosses with Jesus’ body present.  We brag that the cross is empty, the resurrection has happened, and all is new. But we also need to remember that there once hung a body, Jesus’ body, on the cross.

Jesus – God’s Son – did this for us, so we would know how much God loves us. Let’s not take that life and death for granted. Let’s recognize what it cost Jesus to willingly give up his life, for us and our relationship with God. Let’s give thanks for God’s mercy and share that mercy with all who need it. Amen

Posted by Pastor Lynn Fonfara at Friday, April 02, 2021 No comments:

Maundy Thursday, Places of the Passion: The Upper Room

Have you ever had a discussion when a person shares something and you think to yourself, “If you only knew!? They maybe mention something about their childhood and suddenly our childhood nightmares return and we say to ourselves, “ IF you only knew.” Again and again similar things like this. When this happens. Our full body is impacted. Tense up. We put on our mask and pretend to smile thinking if you only knew what I said, what I did, you wouldn’t even be talking to me. If you only new!

We all carry scars whether physical or emotional. We carry it. What is it for you? Perhaps a failed marriage? Addiction struggle? Strained relationship with someone?

Still for others, relationships have changed, children have grown, jobs have been lost, and those who were once close have now died. We’re all hiding some  pain and thinking “if you only knew”

We’re in a  series called Places of Passion. Today, on Maundy Thursday we walk with Jesus to upper room. Coming to the Upper Room we come into presence of Jesus.


Now I got good news and bad news for you. The bad news? Jesus knows. Jesus knows everything.

What’s the good news then? Jesus knows what’s going to happen and YET he still prepares a place for us at the table. How amazing is that?

Jesus knew about Judas. At the last supper Jesus reveals that enemy isn’t only “out there” but rather the enemy is also right here in this room.

As they were eating, Jesus shared one of you will betray me. Jesus knew about Judas yet Judas still has a place at the table.

That is what is so incredible and amazing about the Last Supper. In the midst of all that is wrong and weak and evil and ugly and selfish there remains this truth. They all had a place at this table. Even Judas. Even Peter who denied Jesus three times.

Here’s my point. What may look ordinary can be completely extraordinary. The Lord’s supper is like that. When Christ’s words with giving of the bread where he broke it and said to them “Take, this is my body.” Then he took a cup and after giving thanks he gave it to them, and all of them drank from it. He said to them, “This is my blood of the covenant, which is poured out for many. Truly I tell you, I will never again drink of the fruit of the vine until that day when I drink it new in the Kingdom of God.”

Wow! Not what we expect. It’s so much more. What may look ordinary can become completely extraordinary.

We celebrate Holy Communion until Christ comes again and makes all things new in his Father’s kingdom. Then we will celebrate in the marriage feast of the Lamb in his kingdom that will have no end!

Until then, though, you and I have a place at the table at the communion table why? Because all things are not yet new. Memories still haunt us.  People still hurt us.  Sin still clings to us. Satan still harasses us. If you only knew.

When it comes to the Lord’s Supper, how many are in your party? Do you know? Two. Holy Communion is a table for two. Martin Luther writes, “This is something more than the sermon; for although the same thing is present in the sermon as it is in the sacrament, here there is the advantage that is directed at definite individuals.”

Jesus invites definite individuals-my friends, that is us, to his table with wounded hands. With his wounds, he reminds us that he knows. Christ’s scars are the marks of a God who truly knows us-our suffering, our sin, and our deep pain. But these scars are on the hands of our risen savior. He not only knows, he conquers, he triumphs. Jesus is victor over every enemy.

Jesus knows us. But Jesus knows us in love. After all, there is a place for you at this table all the days of your life. Amen
Posted by Pastor Lynn Fonfara at Thursday, April 01, 2021 No comments:

During our journey through Lent on Wednesday evenings, we have started from a place, a location, in the story of Jesus’ final week on earth. We have been to the house of Simon the Leper in Bethany where Mary anointed Jesus’ feet with fragrant oil; to Gethsemane where Jesus prayed; to the Mount of Olives where Jesus was arrested; to Caiaphas’ Courtyard where Peter denied knowing Jesus; and to Pilate’s Judgment Hall, where Jesus was condemned. 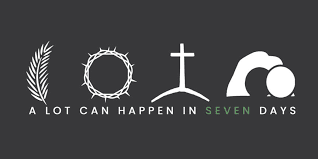 Today, our story begins in Bethphage. This week is Holy Week, and we will travel to the Upper Room for the Last Supper on Thursday evening, to Golgotha for the crucifixion on Friday evening, and end next Sunday morning in the Garden Tomb where Mary Magdalene sees the risen Jesus.

Bethphage means house of unripe figs. It is suggested that it was in Bethphage that Jesus cursed a fig tree for not bearing fruit. Bethphage was a small village near Bethany, where Jesus often spent time with his good friends Mary, Martha, and Lazarus. Most scholars think Bethphage was between Bethany and Jerusalem, so it would have been on the way as Jesus and the disciples walked to Jerusalem. 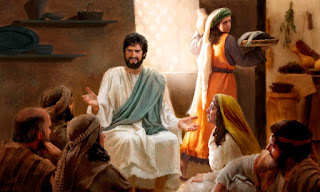 We were all so excited. For months Jesus had been talking about going to Jerusalem. ‘What will happen there?’ we all wondered. We all believed Jesus was the new Messiah, sent by God to save us from the Romans. And yet, he never talked about that.

He only talked about healing people and how much God loves them and wants to have a true relationship with them. He said God doesn’t care so much about the kosher rules and worship rules. He said people are more important than many rules. He sounded more like the prophets, telling us to worship God with our hearts.

I wasn’t sure what was going to happen that day. We set out from our home in Bethany, heading to Jerusalem, a distance of about 2 miles, but it is up and down hills, so it can be a challenge. 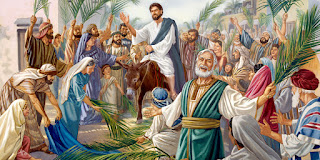 Just as we got near Bethphage, some of the disciples showed up with a colt. Apparently, Jesus had made arrangements for the disciples to fetch this colt, and there they were, right on time!

Jesus rode the colt the rest of the way to the city. Everyone was excited to see what would happen. The closer we got to the city, the more the crowd grew. I’d guess there were 200 or 300 people with us. We were quite a nice parade.

Some people noticed how dusty it was and put their cloaks on the ground to make the road a little nicer for Jesus to ride on. He looked just like a king, riding into town that day, and people started shouting, “Hosanna. Blessed is the son of David who comes in the name of the Lord!”

We all thought something exciting was going to happen, but we were disappointed that day. Jesus went into the temple and said some prayers. When he came out of the temple, he had a good look around and headed back to Bethany and home. Of course, we traveled with him. 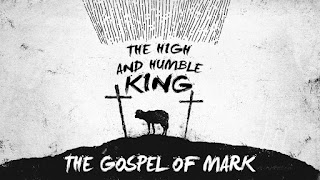 Today, we remember and celebrate this triumphal entry into Jerusalem. For a couple hours, Jesus looks like a king. But what a different kind of king! He is riding on a young horse, not a full-grown steed. He has no weapons, no crown, no royal robes. He demonstrates the humility he encourages others to embrace.

During the coming week, Jesus will demonstrate other ways in which he submits to the people he encounters, as well as to God’s Plan A. He will offer his body and blood, as he presents the bread and wine of the Passover meal and gives it a new meaning. He will allow himself to be beaten and humiliated and crucified.

Jesus will offer his own body to demonstrate how much God loves us. Like the seed from last week’s gospel, Jesus offers his whole self for our salvation, to improve the relationship between God and us. 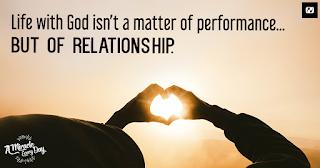 It is fun today to wave our palms and remember Jesus’ triumphal parade. But let’s not forget that this was just a brief moment in the week that got worse and worse for him. Let’s strive to live like Jesus, choosing not the mighty steed but the young colt.

Let’s strive to live like Jesus, choosing not the glory of power but the joy found in obedience to God’s Plan A.

Let’s strive to live like Jesus, choosing to do whatever it takes to have a relationship with God that gives us life. Amen

Posted by Pastor Lynn Fonfara at Thursday, April 01, 2021 No comments: