Today we celebrate All Saints Day. Let’s begin by talking about who is a saint. 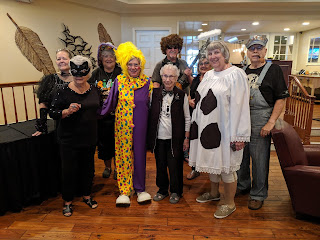 Sometimes, we believe saints are people who wear halos. I went to our Kiwanis Club Halloween party as Holy Cow. But I don’t think that wearing a costume halo makes me a saint.

When I first began to search for images to use, I typed the word SAINTS. And this is what came up. 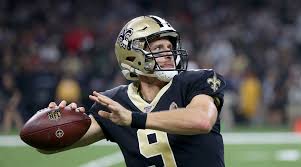 Just in case you don’t know, this is Drew Brees, a member of the New Orleans Saints Football team. I changed my search to ALL SAINTS and found plenty of other images. This image recognizes the Martyrs, the Apostles, the Doctors of the faith (who were the early teachers), and other leaders of the early church. Many saints have been designated as special by the Church.

At first, it was the first apostles and those who died professing their faith. Later, after the persecutions ended, other characteristics were added to determine sainthood. Especially the committee wanted to know if healings were done by the person, either while they were alive or after their death.

As more and more believers died there were not enough days in the year to recognize each one. In the 4th century, a day called All Saints was set to remember them all. 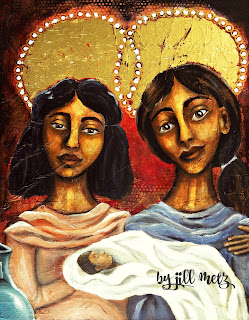 Among the martyrs were two women, Perpetua and her servant Felicity. Perpetua was born in 182, and lived in Carthage, in what is today called Tunisia, northern Africa. We know so much about her because she wrote a diary about her life in prison. It was finished after her death by an editor, who made sure to preserve and share her words. I’ll summarize her story.

Perpetua was pregnant when she and her servant were arrested for believing in and worshiping Jesus. While in prison, she gave birth to a son. Her father came and tried to convince her to recant, in order to save her life, but she refused. Shortly before she was to be killed, she gave her son to her family to care for.

In the arena, after some trials with wild animals, the gladiators were to kill the believers with a sword. Perpetua’s gladiator was a newbie and missed making a lethal blow, so Perpetua took the blade and ended her own life. Perpetua’s servant Felicity was also martyred that day. Their stories demonstrate the passionate faith of the earliest martyrs. They gave their whole lives to following Jesus.

Of course, there are my favorite saints, Francis and Clare of Assissi, who were determined to live with Lady Poverty, and see her as a blessing. They both gave everything they had to those in need. 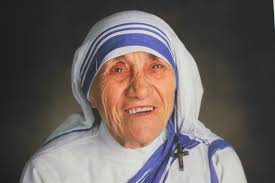 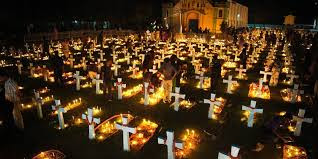 … For a long time, the Festival of All Saints was reserved for people who were declared saints by the church, like Perpetua and Francis and Teresa. The regular folks like my ancestors and your ancestors, were remembered on November 2, on All Souls Day. But that changed for Lutherans since Martin Luther believed that in Jesus all people are simul justus et peccator, at the same time saint and sinner. Those designated as having lived exemplary lives are like the rest of us, saint and sinner.

Many churches today observe the two days together, and on All Saints Day, or All Saints Sunday, we remember the martyrs and other holy ones designated as Saints by the church. At the same time, we remember our own forebears and sisters and brothers in the faith, our own saints.

… I hope this leads you to wonder what it takes to follow Jesus based on Luther’s description of us as both saint and sinner. 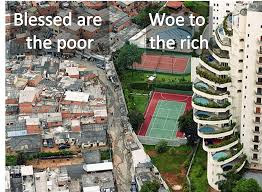 I suspect that Luke’s version of the Beatitudes surprised you when I read the Gospel text today. First, Jesus says, “Blessed are the poor,” not “blessed are the poor in spirit.” We are more familiar with the beatitudes in Matthew’s story of Jesus. And second, Luke accompanies the blessing with a statement of woe. “Woe to the rich.” Matthew's Beatitudes do not include any woes.

This image is of side-by-side neighborhoods. In the neighborhood on the left the houses are close together, constructed of whatever materials that could be found: pieces of corrugated steel, cardboard, plastic. The homes are huddled together with mud streets a few feet wide. There is no running water, no electricity, no sewer system.  … In the neighborhood on the right, there are luxury high rise apartments with tennis courts and a swimming pool. When I look closely, I can see spa on each apartment balcony. Clearly, this demonstrates the extremes of poverty and wealth.

Blessed are the poor, woe to the rich. In response to this imbalance of wealth and its accompanying power, some of us would like to make sure that there is a better balance. But we, those who are less well-off, can’t do much to make the better-off share the wealth. We can press for more fairness in taxation, encourage the wealthy to share more, push for a change in the laws that allow for such deep poverty. But we can’t change the hearts of the wealthy. That’s Jesus’ job.

Jesus tells us our job as living saints is to “Love our enemies, do good to those who hate us, bless those who curse us, pray for those who abuse us. If anyone strikes us on the cheek, we are to offer the other also; and from anyone who takes away our coat, we should not withhold even our shirt. We should give to everyone who begs from us; and if anyone takes away our goods, we should not ask for them again. And, we are to do to others as we would have them do to us.”

In other words, our job as living saints is to act like Jesus. Act like the saints we honor today. 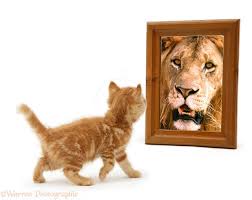 And one more thing. On some days, we feel more like sinner than saint. It can be depressing, frustrating, humiliating. But, it’s comforting to know that when Jesus looks at us, he doesn’t see the little kitten of the sinner. He sees the lion of the saint.

Thanks be to God!

Posted by Pastor Lynn Fonfara at Sunday, November 03, 2019 No comments: