16 When Pharaoh’s household heard the message “Joseph’s brothers have arrived,” both Pharaoh and his servants were pleased. 17 Pharaoh said to Joseph, “Give your brothers these instructions: Load your pack animals and go back to the land of Canaan. 18 Get your father and your households and come back to me. Let me provide you with good things from the land of Egypt so that you may eat the land’s best food. 19 Give them these instructions too: Take wagons from the land of Egypt for your children and wives, and pick up your father and come back. 20 Don’t worry about your possessions because you will have good things from the entire land of Egypt.”

21 So Israel’s sons did that. Joseph gave them wagons as Pharaoh instructed, and he gave them provisions for the road. 22 To all of them he gave a change of clothing, but to Benjamin he gave three hundred pieces of silver and five changes of clothing. 23 To his father he sent ten male donkeys carrying goods from Egypt, ten female donkeys carrying grain and bread, and rations for his father for the road. 24 He sent his brothers off; and as they were leaving, he told them, “Don’t be worried about the trip.”[a]

25 So they left Egypt and returned to their father Jacob in the land of Canaan. 26 They announced to him, “Joseph’s still alive! He’s actually ruler of all the land of Egypt!” Jacob’s heart nearly failed, and he didn’t believe them.

27 When they told him everything Joseph had said to them, and when he saw the wagons Joseph had sent to carry him, Jacob recovered. 28 Then Israel said, “This is too much! My son Joseph is still alive! Let me go and see him before I die.”

I cry out to you from the depths, Lord—
2 my Lord, listen to my voice!
Let your ears pay close attention to my request for mercy!
3 If you kept track of sins, Lord—
my Lord, who would stand a chance?
4 But forgiveness is with you—
that’s why you are honored.

7 Israel, wait for the Lord!
Because faithful love is with the Lord;
because great redemption is with our God!
8 He is the one who will redeem Israel
from all its sin.

8 Now when Jesus had come down from the mountain, large crowds followed him. 2 A man with a skin disease came, kneeled before him, and said, “Lord, if you want, you can make me clean.”

3 Jesus reached out his hand and touched him, saying, “I do want to. Become clean.” Instantly his skin disease was cleansed. 4 Jesus said to him, “Don’t say anything to anyone. Instead, go and show yourself to the priest and offer the gift that Moses commanded. This will be a testimony to them.”

5 When Jesus went to Capernaum, a centurion approached, 6 pleading with him, “Lord, my servant is flat on his back at home, paralyzed, and his suffering is awful.”

8 But the centurion replied, “Lord, I don’t deserve to have you come under my roof. Just say the word and my servant will be healed. 9 I’m a man under authority, with soldiers under me. I say to one, ‘Go,’ and he goes, and to another, ‘Come,’ and he comes. I say to my servant, ‘Do this,’ and the servant does it.”

10 When Jesus heard this, he was impressed and said to the people following him, “I say to you with all seriousness that even in Israel I haven’t found faith like this. 11 I say to you that there are many who will come from east and west and sit down to eat with Abraham and Isaac and Jacob in the kingdom of heaven. 12 But the children of the kingdom will be thrown outside into the darkness. People there will be weeping and grinding their teeth.” 13 Jesus said to the centurion, “Go; it will be done for you just as you have believed.” And his servant was healed that very moment.

This has nothing to do with the reflection, but I need to make a comment. I chuckled when I saw the footnote in the reading from Genesis. In verse 24, the text says: Don’t worry about the trip. The footnote gives an alternate translation of the Hebrew: Don’t quarrel during the trip. Perhaps this is the better translation, knowing these brothers! …

These stories from Genesis and Matthew are about power. The power held by Pharaoh, by the Centurion, and by Jesus. Joseph also has power, or Pharaoh would not have been so generous. But in this story, it is Pharaoh’s power that matters. 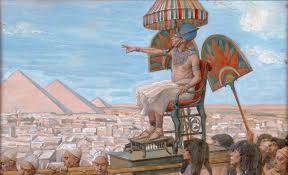 Joseph’s family needs traveling gear, a whole caravan, and Pharaoh says, “OK, here you go.” Pharaoh has the power to send perhaps a hundred men with wagons and pack animals to Jacob to bring the family to Goshen during the famine. 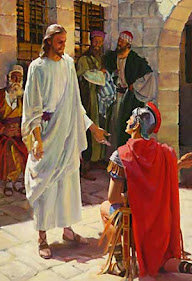 The Centurion asks Jesus to heal his slave. The Centurion clearly states that he is a man with power; he tells soldiers what to do and they say to him, “Here you go.” (actually, they say, “Yes sir!”) And he trusts that Jesus has similar power to command healing, even from a distance. “Just say the word and it will be so.

I wanted to connect this Centurion with the one in Luke 7 who helped build a synagogue for the local Jews, but there wasn’t any evidence to make the connection. It does give us the idea that not all Centurions were cruel, and many may have helped the residents of the region with such projects. In addition, we see that in these days of Jesus’ ministry before his death and resurrection, some Romans came to believe in him – at least they believed in his power.

… What about Jesus’ power? Theologians say Jesus was fully human and fully divine, at the same time, all the time. I spent some time this week wondering about this: what powers did the human Jesus bring with him and what powers did he have access to but were not integral to his incarnated being.

If Jesus is only human while he walked this earth, and does not have built-in divine powers, he must have needed to ask God to heal people, and then God’s power flowed through him upon request.

Or, did he have divine powers within himself from birth? Did he have to learn to not use his powers so he wouldn’t hurt someone, or draw attention to himself? I think of Superman and his alter-ego Clark Kent. This is one of the questions on my list for Jesus when I see him face to face. If it still matters by then.

However he gets the power, Jesus can do things the Pharaoh and the Centurion can’t do. He can heal sick and crippled people. He can feed five thousand hungry people in the crowd with a small starter kit. He can still the storm and walk on water. He can appear with Moses and Elijah and shine with God’s glory. All with just a word. “Here you go.”

In the gospel story, the centurion knows Jesus can heal his slave, so he goes to him and makes the request. He also recognizes the power Jesus has, and that he had the power to heal from a distance. Say the word, and the slave will be healed. And Jesus says, “Wow! What faith you have! You want me to heal your slave? Ok. Here you go.” And the slave is healed.

If Jesus could do that, long distance, and if Jesus is with us all the time, why, we wonder, doesn’t Jesus just say the word and heal us? Why can’t Jesus just make COVID-19 go away? Why doesn’t Jesus say to Bobby, “You need to be healed. Here you go.”?

It seems there are no answers to these questions. I can only remember that Jesus didn’t heal everyone in Israel while he lived there. Only some people. For the rest of us, Jesus assures us of his constant presence through Spirit.

And Jesus assures us of the promise that after death, there is life again. One more kind of power: the promise of resurrection, the power of God to raise us to new life. Even while we trust in the power of science to find cures, we all eventually die. And the power and promise of the empty tomb is the most important one of all. Amen

Posted by Pastor Lynn Fonfara at Thursday, August 20, 2020 No comments: