Baptized by water and fire

Every year, on the second and third Sundays of Advent, we read about John the Baptist. This week, he issues invitations to those who want a fuller relationship with God, and challenges to those who object to his message. Next week, John sends messengers to Jesus to clarify who Jesus really is. Both weeks, John points to Jesus. In a few weeks, we’ll hear about John again, when Jesus is baptized.

Maybe we should start with who John is, since he is so important to the story. On Wednesday, we talked about Angel Gabriel’s visit with John’s father Zechariah. Gabriel says that John will be the one who announces the coming of the Messiah.
When baby John is born, Zechariah sings a song to him. It will be the Hymn of the Day, which we’ll sing in a few minutes. Some of the words go like this:
You, child, will be called a prophet of the Most High, for you will go before the Lord to prepare his way. You will tell his people how to be saved through the forgiveness of their sins. [Luke 2:76-77]
John will go before Jesus to prepare people for his coming. John will tell people about God’s forgiveness.
… About thirty years later, John is living in the wilderness, preaching about Jesus, and he is drawing a crowd. Some are happy to hear they can be forgiven and some want him to shut up. 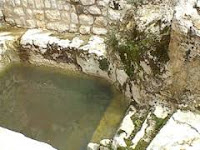 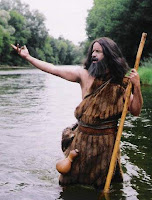 The problem the Jewish leaders have is that John is offering this baptism free of charge, and away from the temple on the banks of the Jordan river. He is not a trained priest, so he is not authorized to offer this service. He is usurping their power. In the end, his message will cost him his life.
In today’s text, his words clarify his position. He is the announcer of something better still to come. John baptizes with water, but the one to come will baptize with fire.
I assume you are all baptized, most of you as infants. You have known God’s forgiveness all your lives, because we frequently talk about baptism and the forgiveness it brings. This is why Pastors stand near the font during the confession and absolution portion of worship.
When we are baptized promises are made: we will learn the catechism; learn to trust God; proclaim Christ through word and deed; care for others and the world; and work for justice and peace. In our baptism, we promise to always point to Jesus.
… What do you think? Were you baptized with water, or with fire? Or both? Sometimes our lives are easy, and baptism by water is an easy swim through life. Other times, our lives are a challenge, and baptism by fire is a more appropriate metaphor.

I love the water, walking near it, listening to it, swimming in it. Last week, Mike and I made an overnight trip to St Augustine. We checked into the hotel and went straight to the beach, where we walked along the wet sand and picked up shells. As usual, I stood and watched the waves roll in and out, constantly in motion, constantly baptizing the shore. It was too cool to want to wade or swim, but I thought about it. Baptism by water is for me like breathing. It’s easy to point to Jesus when life is easy.
I have also been baptized by fire. You know what I mean. Raising children is often baptism by fire. So are many jobs. Some days, just driving on local roads and highways can be baptism by fire. Making the money stretch far enough to pay all the bills is baptism by fire. Sometimes, being black or brown or a police officer or an immigrant or a Muslim or young or chronically ill is baptism by fire.
… When Robbie was born, I was fourteen. He was like my first son, because Mom trusted me to care for him when I came home from school. He was a joy to be with, creative, fun-loving, sometimes aggravating. When I was in college, Mom would send me letters filled with Robby-isms. He loved to take things apart, but he could not always put them back together again.
At about age 12, he started using marijuana. Someone gave him some PCP (a drug also called angel dust) and his life changed forever. The drug made changes in his brain, and he became paranoid schizophrenic. He heard voices. He could be violent. He was depressed. I remember one evening he was laughing with us over a TV program; he left the room for a snack, and came back angry and sullen. It was baptism by fire. How could God let this happen to my beloved Robbie? In the end, he chose to end his own life after 6 tormented years.
We can give in to the fire and turn away from our baptismal promises, or we can remember that we are God’s children and face the fire and allow it to help us grow in trusting God.

… As I was walking the beach, I picked up a number of shells. They are all different. They have all been baptized with water. Some are in great condition. Some are a little beat up. Some of them look like they have been baptized in the fire of wave and sand and rocks.
I offer them to you. Choose a shell that speaks to you today. Choose a shell that is perfect, to remind you of Jesus’ perfection. Or choose a shell that is a bit imperfect, like you. Or, choose a shell that has been baptized by the fire of tumbling in the ocean, like some of the times of your life. And, yes, after all have chosen a shell, you may take shells to give to others.
Place the shell where you can see it for the next few days. Remember as you look at it that it points to Jesus. If you choose a second shell for someone else, tell them that the shell points to Jesus.
Please pray with me. Thank you, God, for people like John the Baptist, who pointed to Jesus so long ago. Help us see you in the water and the fire of our lives. And lead us to point others to you each day. Amen

Posted by Pastor Lynn Fonfara at Sunday, December 04, 2016 No comments: