I was talking the other day with a friend about this Gospel text. She has married and buried several husbands, and it struck her in a way neither of us expected. Suddenly,  we laughed as we wondered together which husband she would have in heaven. Would it be the first one or the favorite one? I then joked that “What happens in heaven stays in heaven.” We moved on to other topics.

The Sadducees don’t believe in resurrection, because there is nothing about it in the Torah, which is the first five books of the Bible (Genesis, Exodus, Leviticus, Numbers, and Deuteronomy). Neither do they believe Jesus could be the Messiah, so they have allied themselves with the Pharisees and Scribes to trap Jesus into giving them an excuse to get rid of him.

Jesus knows what’s going on and he doesn’t fall into the trap of answering their preposterous question.

The tradition in their question is Levirate marriage. When God first gathered the Jews together, they were told to be fruitful and multiply. So, having lots of children was important. Over time, it also became important that each man have children carrying on his name. If a man died without having children, his brother would marry the wife and the first boy would be the heir of the deceased brother. 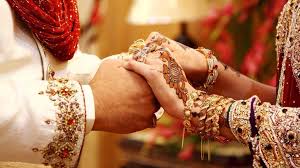 The tradition of Levirate marriage was a way to care for the woman, and obtain an heir for the deceased man. Marriages in ancient times are largely financial contracts in which a groom’s family and a bride’s family promise an exchange of cash or land or some other property.

The bride has little say in the matter, since she is her father’s property, and then her husband’s property. If her husband dies, she becomes the property of the groom’s brother or another male relative. She also may have the option of returning to her family. If no one can take her in, she becomes homeless.

The Sadducees propose a situation in which none of seven brothers are able to produce a child. They ask whose wife the woman will be in the resurrection. Jesus says: None of the above, because in that time and circumstance people do not get married. On earth, people do marry, but it is different in the resurrection.

I notice that Jesus does not say, ‘in Heaven’. It seems that Jesus is talking about a different kind of existence. He uses the phrase “in the resurrection”. In the resurrection, people are children of God, similar to angels. People do not die again, once they are resurrected. 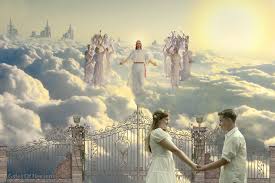 Because Jesus never really tells us what the resurrection looks like, for centuries people have imagined that it is like being in or above the clouds, and up there. The contrast is hell, below the ground, and down there. In reality heaven, or the resurrection, is not a place.

We call the resurrection ‘heaven’ because the ancients called the sky ‘the heavens’ and we humans need a more concrete image than ‘the resurrection’. We say that people go to heaven to be with God. We also imagine that we will meet up with deceased loved ones. This is ‘the hope of the resurrection’, that after our body dies, we will continue to live a different kind of existence in God’s presence.

The Apostle Paul, writing to the believers in Thessaloniki, tells them to not believe those who are trying to convince them that the Day of the Lord has already come. Paul believes it will come with a bang, in the near future, but admits that it is not here yet. In the meantime, believers should hold fast to what Paul has taught them and not believe any messages that differ from what he has taught them.

Jesus and Paul both talk much more about life with each other than life after death. I get the feeling from their words that we are not to focus much on what happens in the resurrection. We are not to think too much about getting into heaven. While we live on earth, we are to do as Jesus told us: love God and love each other. We are to be Jesus’ hands and heart for those we encounter. For example, we can be like this family who posted on social media: 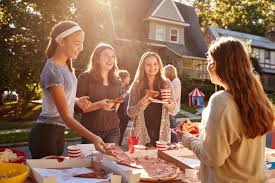 So for the first time, we will not have much family around for Thanksgiving this year. So my husband and I decided we would like to open our home to anyone who also may not have anyone to be with.

Hosting Thanksgiving has been something I have always looked forward to every year and it would be nice to have more at our table than just my husband and I. I realize having Thanksgiving with strangers might be a little odd. But it could also be a lot of fun.

We are a pretty normal couple. I work in the medical field and am a Nursing student. My husband is an electronics professional. Neither of us smoke or do drugs. We are very clean. We do have a dog and a cat but both could be in another room during dinner. I can promise a fantastic meal! I just think it would be nice to have a table full of people instead of being alone and bummed. So if anyone is interested and would like to know more, please let me know.

Some folks commented that they were interested in participating and wanted to bring part of the meal. Many commented that it was a nice thing to do. I love that there were about 60 responses spreading good will and good wishes and praising God.

This is what Jesus and Paul want us to be doing – sharing God’s love and grace wherever we can, whenever we can. Jesus know our hearts, and loving is the pathway into the resurrection, into heaven.
Amen

Posted by Pastor Lynn Fonfara at Sunday, November 10, 2019 No comments: