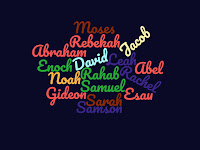 This eleventh chapter of Hebrews has long been called the Heroes of the Faith, or the Faith Hall of Fame. The full list of Heroes is longer than our reading section. The point is that the people listed in the Bible acted by faith to do what God called them to do.

I’m not going to talk about all of them, but want to highlight just a couple of them. It was not raining when Noah started to build the ark. He must have endured the ridicule of his neighbors for quite some time as he built the ship. They must have really laughed at him when he began to collect the animals. It wasn’t raining when he closed the doors. He obeyed what must have seemed to be a crazy idea. He built the ark based on the faith that God meant what God said.

Abraham received a message from God, too. God said, “Pack your things and go west. When you get where I want you to be, I’ll tell you to stop travelling.” I can imagine the conversation around the dinner table that night. “Sarah, you’ll never guess what God said to me today.” “No, I can’t guess. Why don’t you tell me.” “God said we’re going to move west, and we’ll know where to stop when we get there.” “Oh, Great! How am I supposed to pack for that!? Do we need to take everything including the kitchen sink?” “Yes, I guess so.”

God promised them land, children, and fame. The land came, but it was 25 years or more before they had children. In all those 25 years, there is no record of them trusting in another deity to help them conceive. They did try surrogacy, with missed results. Today, their descendants number in the millions or maybe billions. It was by their faith that we know them and consider ourselves to be among their descendants. Hebrews Chapter 11 continues to highlight others: Moses, the entire Israelite people who followed Moses, the Prophet Samuel, and King David. 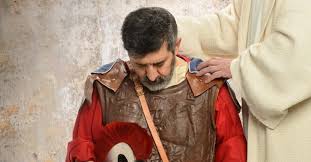 It was by faith that the Centurion approached Jesus and asked him to heal his servant. The Roman soldier did not believe in the Jewish God, yet he asked this rabbi to heal a beloved servant. He even believed that the healing could be done long distance, without even seeing or touching the ill servant. Jesus responded with amazement at the man’s faith, and of course the servant was healed.

By faith, Jesus obeyed God. He taught, healed, touched. He challenged all to see through new eyes. He was arrested, executed, died, and was raised. Even when he was fearful, he yielded and put his faith in God’s plan. 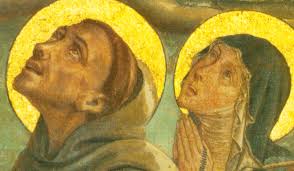 Today is the feast day of St Clare of Assisi, a partner in faith with St Francis. Early in the 13th century, Francis Bernardoni of Assisi, heard a message from God. “Rebuild my church, which, as you can see, is falling into ruins.” He was the son of a wealthy merchant, and gave up his wealth and his family in favor of literally, stone upon stone rebuilding a few small chapels, and then figuratively rebuilding the church.

By faith, he began to pursue a life as much like Jesus as he could. He preached and taught that Lady Poverty is the highest goal of a Christian life. When we own nothing, we do not worry about protecting it or getting more to worry about. I’ll talk more about Francis next month as we observe his feast day. Today, I want to talk about Clare.

It was by faith that Clare began to listen to Francis and sought to follow him. She was a wealthy young woman, promised in marriage to a wealthy man. It was with the assistance of her priest and Francis that she escaped one night. Francis welcomed her and cut off all her hair as a sign of her willingness to follow Jesus wherever he led her.

At first, Clare was kept safe from her family in a Benedictine Convent, but she was not happy there. In those days, there were two classes of women in the convent, those with money and servants, and those without. Those without money were the servants to the wealthy women. Even though she lived there as a servant, Clare was not living in true poverty. She wanted to live a life fully dependent on the goodness of God. 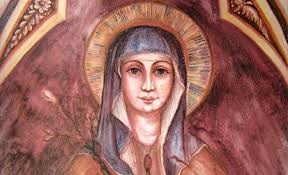 Her family tried to rescue her from the convent, but she grabbed hold of the altar cloth and refused to let go. It was then that her family saw her shorn head, and knew they could not marry her to anyone because her beautiful long hair had been a symbol of her value as a bride.

Soon, Francis was able to get Clare and a few other women settled in a church compound called San Damiano. While Francis and the other men friars could easily go about in public, women were much safer behind locked doors. So Clare and her sisters stayed in a cloistered convent.

A few of Francis’ brothers looked after them and brought them offerings of food and clothing from the people in town. They spent the majority of their time in prayer and meditation. The women grew vegetables and made bread to feed themselves. In winter, Clare often denied herself food so her sisters could eat. Her health suffered as a result of this extended fasting. 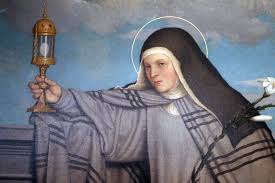 One day, a small army approached San Damiano. Clare had all the women gather in the safety of the private rooms, while she grabbed the box that held the consecrated bread. As the soldiers tried to enter the church, Clare raised the box. It glowed like it was on fire and the soldiers retreated in fear.

Clare committed her life to poverty, to caring for the women who came to join her, and to establishing an order with its own Rule. (A Rule is a description of how the community will live together.) She is the first woman ever to start an order, and the first woman to write their own Rule. That it was accepted by the Pope is even more remarkable since the Pope had declared years before that there would be no new orders established, and no new rules would be approved. 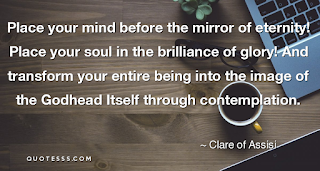 As a wealthy woman, Clare was educated and wrote beautiful, complex prayers. The Benediction I’ll use today is one of her blessings. This is another of her prayers: ‘Place your mind before the mirror of eternity! Place your soul in the brilliance of glory! Place your heart in the figure of divine substance! And transform your whole being into the image of the Godhead itself through contemplation.’

Clare loved to play with images to help us understand who God is and who we are in relationship with God. God is eternal, and we see our own reflection, our own image, when we look at God. By faith, Clare followed Francis’ way of following Jesus. She followed God by giving God her whole mind, soul, heart, and being. Her reward was a deep relationship with God. 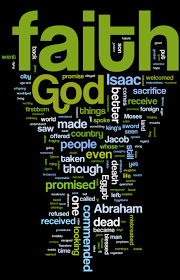 It is by faith that we learn from and follow our heroes of the faith. I am intrigued by Noah and his family and their willingness to think big, in faith. I am amazed by Abraham and Sarah and their willingness to travel into the unknown and wait so long, while living by faith. I am impressed that the Centurion believed Jesus could and would heal his servant long distance. I am blessed to put my faith in Jesus and trust that he is God with skin on. And I am drawn by Francis and Clare, who challenged the rich and powerful, and chose poverty as the path to following Jesus.

Posted by Pastor Lynn Fonfara at Sunday, August 11, 2019 No comments: